This blog’s first “HA! Told you so” moment

My blogging career is but a few weeks old and already I’ve been afforded an opportunity to strut and preen.  The occasion is my prescience two weeks ago in writing that oil-rich autocratic regimes (and China) ought to be more frightened by events  in Bahrain than Egypt.  Saudi Arabia took note yesterday and sent 1,000 troops to Bahrain (their neighbour via a 25km causeway) to help prop up Bahrain’s ruling Khalifa royal family.  This was at the request of the Bahraini government, so it was ostensibly their idea, but there is absolutely no doubt that the House of Saud’s  intention is to demonstrate to their citizens that they do not want Bahrain’s story to be replayed in Saudi Arabia.

Bahrain’s revolution, if we can yet call it that, has been going on for a 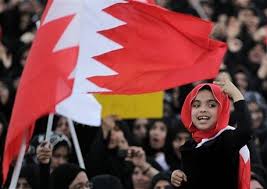 You can almost feel the rage

month now, since a “Day of Rage” was called for in Pearl Square in the capital, Manama. So far, the Saudi kingdom has not seen a need to get explicitly involved in the Bahraini situation (although domestically, King Abdullah has thrown $36 billion at his people to stave off any unrest).

BUT last week, from my observance, there seemed to be a turning point.  The Pearl Square protesters went from demanding things of the king (e.g. ending discrimination against Shi’ites in housing and government jobs, dissolving the cabinet, etc.) to demanding that the king himself leave.  The Saudis next door probably felt that, if the first sort of protest were mimicked in Saudi Arabia, they could handle it.  But demanding the removal of a monarch was a step too far, and thus the intervention.

With all this said, I really don’t think that Saudi Arabia’s intervention in Bahrain will spark a regional conflict that will draw in Iran, as some are suggesting.  There are plenty of reasons why this is the case, but that’s all I ‘ll say for now.

Final thought: What a rough year for Wiz Khalifa.  First the Steelers lost the Super Bowl, and now his fam got haterz.

This entry was posted in Uncategorized and tagged Bahrain, Middle East, smart ass. Bookmark the permalink.