A few words about Lance

It’s been almost two months since Lance Armstrong was all but formally stripped of his seven Tour de France titles, but the fallout continues, as do the questions from many of my British (and other European) classmates about the whole sordid affair.

The extended period of time that Lance’s shaming in the public sphere has carried on is indicative of the degree to which his personality and legacy were allowed to permeate American sport and consciousness. In recent days, we’ve read that Nike, Trek and Budweiser have now ended their endorsement deals with Lance (quick reflexes there, eh?), that his quote is being removed from an Olympic training centre, and that he is stepping down as the head of a foundation that he created. The fallout will likely continue for quite some time. 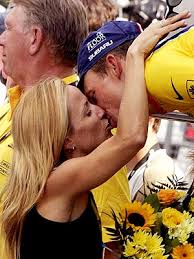 In truth, I was very late to jump on the Armstrong bandwagon, so I’m not exactly heartbroken by Lance’s downfall. In his early years of winning Tours, there were plenty of reasons to hate him: He was arrogant (and for my European readers, I mean even more arrogant than your average American). And he left his wife, who had stuck with him through his life-threatening cancer, for Sheryl Crow.

But there were other reasons I wasn’t rooting for him in those early years. For some reason, I felt more affinity to Jan Ullrich. Lance was my compatriot, sure, but his story wasn’t as easily to relate to as Ullrich’s. Armstrong had a dramatic tale of surviving cancer and rebuilding his body from scratch to win the Tour. Ullrich was just a hard-working kid whose only fault seemed to be coming of age at the wrong time (of course Jan might have had some character flaws as well).

All that said, I’m still not happy to see Lance’s star come crashing down the way it has.

Lance was admired and regarded as a hero for so long because he was what we wanted him to be. In his now-parodied Nike ad (here’s the original), he affirmed what every athlete — even the most amateur — wants to believe: that the human body is infinitely malleable and is ultimately limited only by our level of determination. One year, during their annual acknowledgement of pro cycling, Sports Illustrated none-too-subtly compared Lance and Neil Armstrong. And it was a fair comparison — both individuals changed our notion of what was possible.

The truth is, we created Lance Armstrong (and Mark McGwire and Barry Bonds and Marion Jones and…) because we wanted heroes who were superhuman and Lance was all-to-willing to oblige.

I don’t buy the argument (advanced by none other than Malcolm Gladwell) that Lance ought not be punished for simply doing what everyone else at the time was doing, but doing it better.  But I do think we’ve neglected to address one of the most important issues surrounding that particularly dark period in cycling history that began with Bjarne Riis’ now discredited 1996 Tour victory, included the 1998 Festina Affair, enveloped Lance’s 7 years at the top, and still hasn’t completely ended, but might at least have marked its final act with the nullification of Alberto Contador’s 2010 Tour title.

That oft-neglected issue is this:   We LOVED watching races during that era. A doped up Lance Armstrong versus a presumably doped up Jan Ullrich with an occasional third party (such as an about-to-overdose Marco Pantini, or a rising doping star like Ivan Basso) was good theatre and we ate it up. Some of the fastest races ever took place during those EPO-addled years, and fans appreciated the enhancements to the race.

Really, all of you guys? Surely there must be someone in the Top 100 this year who didn’t dope.

Armstrong’s rise in the  European peloton sparked an interest in professional cycling among Americans that continues still.  On the other side of the Atlantic, a researcher in Belgium conducted an interesting study of what characteristics influenced viewership of individual  stages in the Tour de France between 1997 and 2010. He found that allegations or suspicions of doping (as defined in the study) had little impact on viewership. Trust? Sure, but not viewership.

So, as I said last year in my ode to Thomas Voeckler, I now revel more in the human moments of professional cycling — riders grimacing (and rightly so) as they struggle over forbidding mountain passes, Bradley Wiggins appealing for civility after a series of punctured tires, or the cunning tactical maneuvers of teams where mental acuity is running higher than physical stamina. Lance Armstrong was the culmination of a generation that offered us cycling performed by superhumans. We liked the product, but ultimately, didn’t like the production process.

This entry was posted in Uncategorized and tagged Cycling. Bookmark the permalink.

2 responses to “A few words about Lance”