My relationship to political talk shows of any sort in any medium could be described using an SAT analogy:

That is to say I don’t often watch them.  The equivalent of Dos Equis would be

those interviews that just sound so intriguing that I have to watch the clips online later, such as Lupe Fiasco on the O’Reilly Factor or Cornel West and Mos Def appearing together on Bill Maher.  But usually whenever I watch any sort of political talk show, I feel discouraged about humanity and annoyed at all the shouting.

Here is the question I asked myself last week, after a spirited, but ultimately amicable political discussion with my dad and uncle:

Why is it that ordinary people can have such discussions without descending into shouting and name-calling, but the professionals on TV can’t?

Part of the answer is that the people on TV aren’t like you and me or the family and friends with whom these discussions take place.  Oftentimes the people on TV have a sense of self-importance that makes them feel entitled to never be interrupted or corrected, and a need to verbally bludgeon anyone who deigns to do so.

I think an equally important reason is that the “debates” on political talk shows don’t happen under the same circumstances as those with friends and family.  The context of a discussion probably does more to shape its tone than the content. Think back to college and how a discussion about the exact same topic would play out in a classroom versus in a dorm.

This leads me to my grand idea for a show:

The most important element of the show will be the set: instead of having one one of those big circular desks in the studio with a backlit world map, oversize monitors or some other gaudy backdrop, I would have two (or maybe three) comfy chairs in the center of the stage and a bar off to the side. 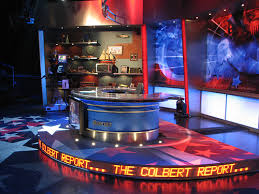 When I introduce the guest (usually some political figure) I would meet them at the bar, and we’d chit-chat while the bartender (whose character for the show could be developed) got our drinks.  We wouldn’t discuss anything political until we had our drinks and were sitting in the comfy chairs.

Hopefully the relaxed atmosphere would make for less heated exchanges, and having a drink together would make the conversation seem more like just that — a conversation.

Usually I hope someone with the means to actualize will still my ideas, but truthfully, I would be kind of jealous if someone else actually gets to host a show like this.