The “Birthers” of the 19th Century

This is already a departure from the newly established pattern of this blog to generate socially entrepreneurial ideas, but I’m struggling to articulate some of my recent thoughts in this area, and I thought it would be fun to write a short post about a historical figure and our present madness.

Now that President Obama has been forced to stoop to the level of his critics and address the so-called “birthers,” I suppose I too shan’t deem myself above commenting on this petty debate.  But I want to give it some historical depth, by looking at the Presidency of Andrew Jackson, our 7th President, 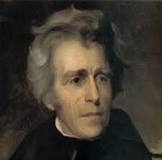 in office from 1829-1837.  There are two competing assertions and assumptions that surround the ruckus over Obama’s birth certificate, that I will challenge:

1. That this issue is all about race.

2. That this is about the President’s place of birth, and the documentation thereof

The first point is a common lament of Obama’s supporters who ask if such ridiculous questions would ever be put to a white president.  In some ways, they already were asked of Andrew Jackson (granted,  some of his opponents alleged that he was the son of a British prostitute and a mixed-race father).  North and South Carolina now argue over which state can claim him as their own, but in his day, plenty of his critics alleged that he wasn’t born in the Americas at all.  He was the son of Irish immigrants, and some said that he was born on the ship on the journey over, and even that he wasn’t actually named “Andrew Jackson” but that he’d stolen his brother’s birth certificate.

So, in one sense, ridiculous claims about natural-born citizenship (or lack thereof) can’t be just about race if they were first leveled against Andrew Jackson, a white guy. BUT, in another sense, they are about race.  Jackson’s and Obama’s both were historical presidencies that marked a shift in who Americans considered Presidential.  Before Jackson, all six US Presidents had been Aristocrats from Virginia or Massachusetts who were of English pedigree.  Jackson had plenty of strikes against him: not only was he the son of Irish immigrants, but he grew up dirt poor and openly considered himself a man of the people.  Jackson clearly did not fit the Presidential mould, and that rendered attacks about his upbringing, qualification and family more believable.  Class was to Jackson what race is to Obama –something that set him apart from his predecessors,  and challenged those informal requirements for the Presidency that are not proscribed in law, but rather in American consciousness.  Perhaps, then, we could say that he current birther movement is not so much about race as it is about difference.

How many times have you heard someone say, “I agree with most of President Obama’s policies, but I’m deeply concerned about this birth certificate thing”?  Not very often, right?  And that brings us to the second assumption — that either “birther” conspiracy was actually about place of birth.  As  with President Obama, anyone who said President Jackson wasn’t truly an American citizen probably said much worse things about the man.  Because Jackson was president before anyone had heard of Hitler or before  Socialism became an organized doctrine, Jackson’s opponents used the equivalent labels of the time: Before he was elected,  his opponents spread fear that he would institute a military dictatorship.  When he vetoed the Second Bank charter (if you really want to read more about the Bank War, be my guest), his critics compared him to the French Revolutionaries and the Roman Empire.  It would seem that the belief that Jackson (or Obama) might not be a true American citizen was an effect of his opponent’s fierce dislike of him, and not a cause.